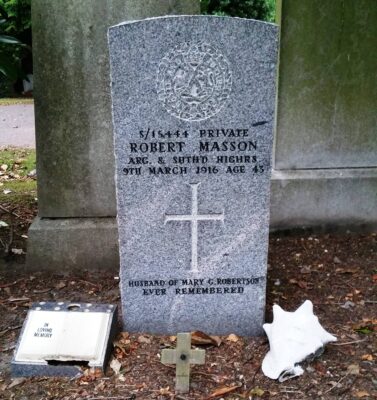 Robert enlisted in Bo’ness on 2nd December 1915.
He was discharged from his battalion suffering from asthma on 20th December 1915.
Robert was admitted to No.2 Scottish General Hospital, Edinburgh by his GP (Dr Cross, Linlithgow) and he died there on 9/3/16.
Although discharged from the army he had never received his discharge papers and as a result the army regarded him as still being a soldier and so paid the funeral expenses.

Robert’s occupation was a Spirit Dealer and he owned The Crown Inn in Grangepans.