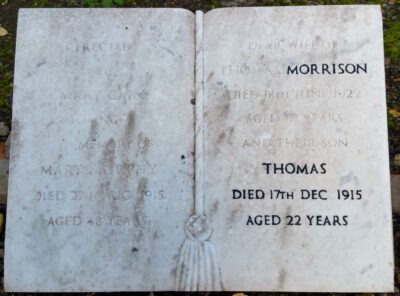 Although Thomas Morrison appears on the Bo’ness War Memorial, he was until very recently NOT commemorated by CWGC, even though he fitted their category two criteria, i.e. – “personnel who had been discharged from or retired from the military before their deaths during 4th August 1914 to 31st August 1921 of an injury or illness caused by or exacerbated by their service during the same qualifying period“.

These casualties are called “non-comms”.

Work by Mark Duffy of the Scottish Military Research Group, physically looking through the Registers of Soldier’s Effects, discovered information about Thomas and a case was submitted to CWGC. They accepted the case that, according to his medical discharge papers, his condition had been aggravated by his service, and he was added to CWGC in September 2016.